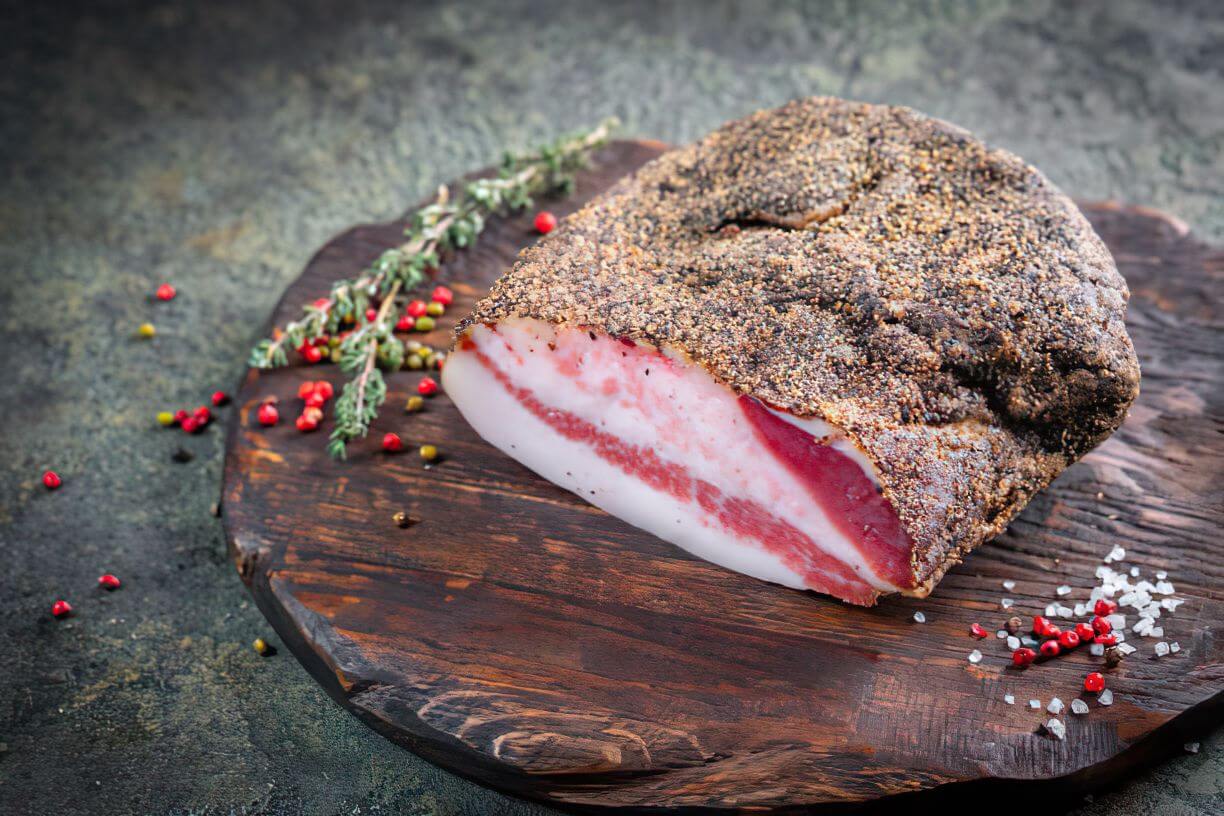 Guanciale is a traditional central Italian cured pork product from the areas of Umbria and Lazio. Pronounced “gwon-chee-ah-lay”, it is made from the pork jowl. Although you don’t see pork jowl for sale often in the US, this cured pork is similar in some respects to bacon and pancetta. Like those two cured pork products, it is mostly fat, with striations of meat layered between. However, the pork jowl has a more intense and distinctive aroma and flavor and its fat texture is particularly fine and delicate.

Depending on how long guanciale has been aged, it can be used in various ways. Saltier, well-aged versions can be simply sliced thin and served as charcuterie like prosciutto or lardo. Alternatively, it is often cooked up like bacon. However, one of the most traditional uses of it in Italy is in pasta alla carbonara. Most modern recipes for that dish call for bacon or pancetta. However, the traditional ingredient is this one, often cut into thick lardons and fried up, the rendered fat adding to the sauce of the pasta and giving it a distinctively rich and savory flavor.

The basic idea is that raw pork jowl is cured in a mixture of salt and various seasonings (these depend on the specific version but usually include a simple mixture of pepper, garlic, and herbs) and then hung to dry for at least a few weeks but often more. Once done, it can keep hanging or in the refrigerator for several weeks to months. Alternatively, it can be sliced or cut into lardons and frozen until needed.

This cured meat can vary quite a bit in its preparation. While some like it less intensely seasoned, letting the natural flavor of the jowl meat stand out, others feel that the intense salt and seasoning stands up nicely to the rich pork flavor. Below I’ve listed the ingredients, but I’ve given some ranges. If you want the more intensely seasoned version, use the larger amounts of each. In addition to more seasoning, you can also cure it for double the time to give it more intensity with either recipe. Play around with it and see what you like best.

How to prepare the guanciale:

That’s it! The jowl is now ready to use. As mentioned before, if only dried a few weeks, it is probably best to use in cooked preparations such as pasta alla carbonara or as cooked bacon slices. If it has been aged longer, it can be sliced thin and eaten as is, plain, drizzled with olive oil, on pieces of baguette or even on pizza. Experiment with this rare delicacy and enjoy!