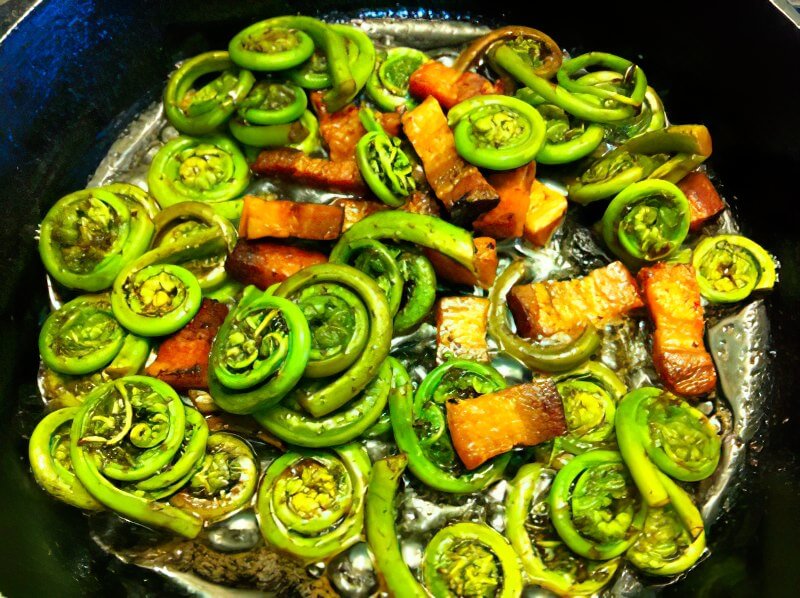 Grilled Fiddlehead Fern Recipe? Did you know you could eat fiddlehead ferns? You know, those cool spirally young sprouts that grow up from the base of a fern and slowly enlarge and roll out to become fern fronds? When they are in this young fiddlehead stage they are crisp, tasty, and good for you.

These ferns have been a rare delicacy in the past, mostly because not many people realize you can eat them. But they are abundant and are gaining in popularity and recognition as the general eating public becomes more sophisticated. I’ve started to see them available in some grocery stores such as Whole Foods. They are only available fresh for a couple of months of Spring each year but you may be able to find them frozen as well throughout the year.

I’ve found that these are best suited to simple preparation, letting their natural freshness shine through. I think a bit of smokey bacon and garlic are a great combination. They taste a bit reminiscent of asparagus but have their own unique flavor. They are best when they still have a bit of crunch to them, not cooked too long. Of note, if you are vegetarian or vegan, you can use the same basic recipe but just use some olive oil instead of the bacon for cooking.

I haven’t cooked fiddlehead ferns directly on the grill as they are rather small and thin and could easily fall through the grill grate. You could certainly cook them in a vegetable grilling basket or skillet but for this fiddlehead ferns recipe, I use a heavy cast-iron skillet.

What You Will Need:

How to Make this Grilled Fiddlehead Fern Recipe:

Thats it! Your fiddlehead ferns are ready to be served!